The tease is over for you, but not for me. The rolls are out of the oven and in the fridge, awaiting their trip to work tomorrow where I will get the final review. I've retyped and noted the recipe I adapted bellow which I found elsewhere and modified some. I only baked one 9" pan for work, I kept a 9x13" pan, un-risen, covered, and sitting in the freezer to keep it dormant. I will thaw overnight for the weekend and go all OMNOMNOM on them with friends. Photos for reference will be posted way bellow the long-cat like recipe. This was definitely a labor of vegan love, but that's one thing I love about bread, the amount of craftsmanship that goes into it. This is how all fall cinnamon rolls should be made, with friggin' pumpkin in them!

UPDATE! They lasted about 5 minutes at work. Reviews are all positive, including mine, I have brown sugar frosting in my beard.


(*To toast pecans, preheat over to 350, place on a nonstick pan or spray a cookie sheet with cooking spray, and toast for 4-5 minutes, be mindful not to burn. Best to chop after toasting.)

So I started the no knead pumpkin pecan roll dough last night, It takes 2-3 hours to rise and I like to let it ferment in the fridge over night to form proper gluten and let the flavors mingle. Here are some tease pics and the initial dough recipe to peak your interest.


Tonight I'll be rolling out, covering in sugar and pecan goodness, cutting, and placing in baking dishes. Where I will then cover and place back in the fridge till baking.

So as per routine it seems I am posting a bit late. I think it was the fact I fell asleep on the couch around 9pm last night. I went with a nice simple comfort food for Monday night, since I was suffering from the usual weekend jet lag of staying up all night and sleeping in and then returning to a 8-5 job. For some reason, I was madly craving sloppy joes. Perhaps it was my drunken friends quoting the lunch lady from Billy Madison over the weekend.


I went with the tried and true Snobby Joes from the Veganomicon. The only change I recommend, as mentioned in the comments and depending on your spice cabinet, is to cut back, down to even half, on the chili powder. Mine packed a bit of a kick, but I think since I'll be eating them for a few days as left overs, I'll be adding a little (better than) sour cream.

I served mine on my oversize home baked french bread buns which were toasted with a light coat of earth balance. These hings are a good 1/3lbs loaf. To make the potatoes I simply tossed some fingerling potatoes with fresh chopped rosemary, garlic, and olive oil. And roasted for about 30 minutes at 450, or until fork tender. Tonight I'll start a no-knead pumpkin bread dough for a pecan pumpkin rolls, a recipe I recently found and will be slightly modifying to be vegan. And of course i'll still be eating left over Snobby Joes.

What happened to September?

Well October snuck up on me. I had the complete intention to blog on the first of the month, just I apparently completely glossed over the detail that it was this past Saturday. My brother needed my help to move a bunch of things from his garage to a storage unit, and on top of that I was stuck Sunday drinking beer and watching football by my friends pool. Talk about a crazy busy weekend?! 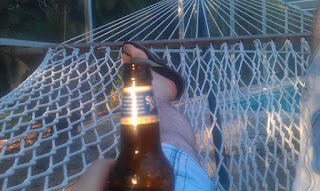 So while I failed to get pictures of the Grilled Teriyaki Marinated Portobello Mushroom caps I made to go on my home made French Bread Buns that I toasted over a hickory fire with olive oil (btw, hickory smoked toast is amazing). I did get some pictures of the Apple Cinnamon pizza I made Saturday evening for a snack, and Sunday Breakfast.

Rather simple but rather delicious. It's all in how your layer on the toppings. No true measurements just all done by hand. You can use your favorite pizza dough, this was just some left over bread dough I had, but you often can find pre-made dough in your super market freezer area or by their bakery. I'll be covering breads more through out the month. Will do a week of flat breads probably mid October.

Tonight I will be prepping some no-knead egg-style dough used for sweet breads and challah. I plan on making pecan sticky buns and maybe a small braided loaf, maybe with some sort of fall flavors mixed in.

I still have some of my large french bread buns, so I'll be making some sort of sandwichy goodness to go with it. The weather here just got cool, and I've been craving sloppy (lentil?) joes.