Every Vegan rants about it at least once, the inevitable conversation when dealing with carnies.


As if a vegan's diet is composed of nothing but salad.  Worst part is, most places don't even have a vegan friendly salad without pissing off your server asking for them to omit some sort of cheese, or inquiring what is actually in their balsamic vinaigrette (why the hell do they put dairy in there?). Of course this is why the carnies always ask where we get our protein from, because the only vegan thing they can think of is salad.  On a side note, does anyone else call the carnivores around them carnies? 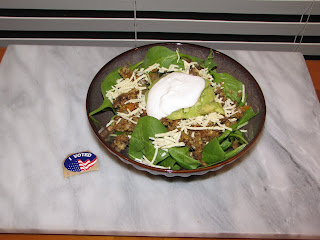 Remember the stuffed squash I made on Monday? Of course you do! Well the left over stuffing, mixed with some taco seasoning and reheated made, a fantastic taco "meat" like topping.  A little Daiya cheese, some guacamole, and a dab of Vegan sour cream. There you go, Vegan Taco Salad... Everyone should be happy though as I am out of left overs which means tomorrow I'll be cooking again.

P.S. Oh yeh, I did get a haircut after work, and I shaved the beard down to one mighty mustache for Movember.
Posted by Seth at 9:08 PM

Seth
Taking the geek to nature. When you make your living herding electrons, interacting virtually with coworkers, and illuminated by the cool glow of lcd panels and led lights, you start to find a void in your existence. This blog journals my attempts to reconnect with the natural world, physically, socially, and mentally.