So the lovely vegan peoples over at reddit posted a link to cupcakes with a mini pumpkin pie heart.  They cried out to veganize the recipe.  Well the sympathetic yet evil mad scientist in me couldn't resist the urge to Frankenstein some pastry, so I took my vegan stab at it and put on my own twist.  I decided to go with a Chai Latte Cupcake from Vegan Cupcakes Take Over the World (Pardon my shameless advertising). Its a cheap cookbook, its an awesome cookbook, you should already have it.

It was fairly straight forward, start off with a batch of "Basic Single Pastry (page 262)" in the Veganomicon

.  Roll it out, cut out small circles (I used a small glass) and press them into a mini muffin pan.  Preserve the extra pastry, and use it to make some ramekin pumpkin pies.  Mix up a batch of your fav vegan pumpkin pie base, I like this one here.  I baked the mini pies for 30 minutes at 350, and left my 4 ramekin pies in the oven for a total of 55.  Let the little pies cool, and move on to your cupcakes. 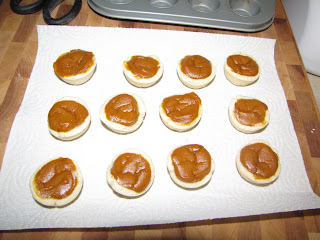 I just followed the recipe from VCTOtW for the Chai Latte Cupcakes.  I thought this would accent the flavor of the pumpkin pie nicely and add a nice spice.  Personally I think I was right.  I put a heaping tablespoon (I used a .75oz Disher if I recall), filled the bottom of the cupcake liners, and then set in my little pumpkin pie tarts. Then I topped them off so that overall it was about 5/6's full (They don't rise as much due to the heavier cake batter and the pumpkin core)  Baked 24 min at the recommended temp, which is just a few longer than the recipe calls for, trust me they are plenty moist. 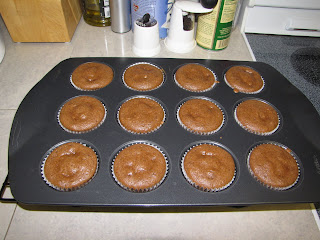 Let them cool down, and then top with a Cinnamon Cream Cheese Frosting. I made mine:

I put the Frosting in a pastry bag, and let it chill with the cupcakes in the fridge overnight.

Once everything is nice and cold, top the suckers off and enjoy. 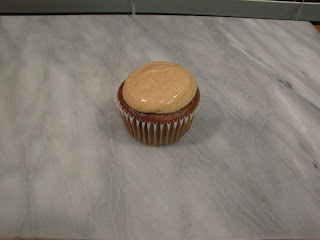